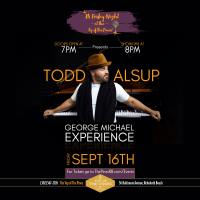 Are you ready for the Todd Alsup Vocal Experience?

TODD ALSUP, singer, songwriter and keyboardist, is a Detroit native and a proud New Yorker. His original songs and fresh arrangements of classic R&B and pop tunes have endeared him to audiences all over the world. His debut EP, Facts & Figures was hailed by critics and earned him a Yamaha endorsement. Songs from his LP, Todd Alsup were featuredon MTV and PBS.

His single The Only Thing won the OutMusic Award for Pop Song of the Year. His third studio album, Currency was recorded in Switzerland with Orlando Ribar. Todd has a close-knit group of fans affectionately known as THE TODD SQUAD. This year, he created and performed two new solo shows built around the songbooks of two major gay pop icons. “Elton Undressed” - a stripped down journey through the timeless songs of Elton John - premiered at Hartford TheaterWorks in April. “Freedom: The George Michael Experience” - which traces the superstar’s complex life through 20 of his biggest hits - is wrapping up a sold out summer run in Provincetown.

Tickets are non-refundable. (If you can't attend be sweet and give it to a friend)