Ptown's Paige Turner in "Tucking Myself In" 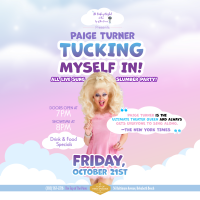 Ptown's Paige Turner in "TUCKING MYSELF IN"

Get ready for TUCKING MYSELF IN! After a full season headlining in Provincetown-Showbiz Spitfire Paige Turner comes to Rehoboth with her all-LIVE-SUNG slumber party! NYC’s tawdry blonde bombshell invites you into her boudoir for an evening of mayhem and campy foolishness! TUCKING MYSELF IN! features ridiculous parodies and songs from HAIRSPRAY, TAYLOR SWIFT, PETULA CLARK-CARLY RAE JEPSEN & More! So snuggle up, put on your PJ’s, and get ready for this DRAG-tastic evening!

NYC’s most recognizable names in drag “Showbiz Spitfire” PAIGE TURNER! Known as the love child of Barbie & Pee Wee Herman, This 2-time Glam Award winner tours internationally in her All -Live Sung one woman shows. She is a headliner for Atlantis Cruises and Aquafest Events and has a summer residency in Provincetown.  Paige coined the phrase Slurp! which was NYC’s longest running drag show.  She was an original cast member of the reality show Shade: QUEENS OF NYC, on the Fusion Network and has been featured numerous times on WATCH WHAT HAPPENS LIVE! With Andy Cohen On Bravo, even portraying Mary Poppins for Dame Julie Andrews!

“A perfect blend of spectacle and showmanship that fills the entire room!”

“Paige Turner is the ultimate theater queen and always gets everyone to sing along.”
THE NEW YORK TIMES

“Hilarious and delectably witty!”
OUT MAGAZINE

In the same vein as the Carol Burnett Show and Pee Wee Herman!”
HUFFINGTON POST

“Paige is an excellent singer and performer with a gift for selling songs!”
BROADWAY WORLD

Tickets are non-refundable. (If you can't attend be sweet and give it to a friend.)