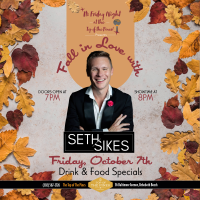 Fall in Love with Seth Sikes!!

This is a show NOT to be missed!!

As seen in Fire Island!! Seth Sikes is one of New York’s most popular young nightclub performers. Hailed as “the best male singer of his generation” by Theatre Scene, Sikes has been selling out venues since his 2014 debut Seth Sikes Sings Judy Garland. The show recounted how Garland inspired Sikes as a young boy in Paris, Texas, while he belted the legend’s greatest hits backed by a seven-piece band. The show won Broadway World’s Best Tribute Show award and prompted The New York Times to declare, “The performance was a hit with critics and audiences alike.” When the Covid pandemic prevented Sikes from performing for live audiences, he created a series of music video parodies (many of which were set on Fire Island) that went viral, seen by hundreds of thousands online. His most recent video, “Ring Them Bells,” was selected to close the globally watched Liza Minnelli 75th birthday tribute.

Book your tickets NOW for this amazing vocal experience!

Tickets are non-refundable. (If you can't attend be sweet and give it to a friend.)